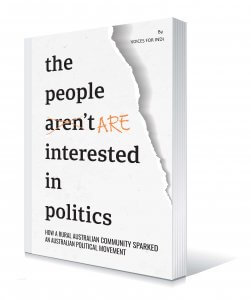 Just months before her spectacular defeat at the 2013 federal election, Liberal MP Sophie Mirabella proclaimed to members of the newly formed Voices for Indi that “the people of Indi are not interested in politics”.

A group of ordinary community members gathered together with a shared determination to prove otherwise. And so began a movement which disrupted the ‘safest’ Liberal electorate in the nation and delivered the first independent ever to be elected in the seat, Cathy McGowan, to Canberra. In 2019  Indi again made history when Helen Haines became the first independent in the Australian Parliament to follow a retiring independent MP in the same electorate. And Indi has just done it again in 2022 with a 7.35%  swing to Helen Haines.

Over the last ten years, the people of Indi have  created a new standard for effective political representation in Australia. Their message, first heard at kitchen tables across the valleys and mountains of Indi and eventually in the ‘house of the people’ in Canberra, was clear: the people are very much interested in politics.

This is the definitive story told by many of the people closely involved with Voices for Indi. A behind the scenes account of how a discussion between a small group of people , held quietly in the back room of the Wangaratta Library,  led to the political playbook in Australia being changed, possibly forever.

V4i endorsed Cathy McGowan as an independent candidate for the first time at the 2013 election after an extensive community consultation process  revealed that a large number of Indi constituents wanted an opportunity to choose an independent as their representative. The community mobilised a grass roots campaign and against the odds, claimed victory, unseating the previously safe and long standing Coalition member.  Cathy was relected in 2016 with an increased majority and the ‘Indi Way’ was further embedded.

In January 2019 V4i were encouraged by supporters to design and facilitate an innovative, first time process to give the community a mechanism for  identifying another high quality  Independent candidate to consider getting behind. As a result of this process the community (none of the V4i Committee voted in this process) invited Dr Helen Haines to stand and history was made again when Helen was elected to succeed Cathy McGowan AO at the 2019 Federal election after a campaign supported by 1750 volunteers.  The support for  Dr Haines as the Federal Member for Indi is ever increasing because she continues to uphold the standard set by Cathy McGowan, of honest, respectful and constructive politics based on inclusion, valuing all voices and true representation of her constituents as sought by the community that elected her. It’s the ‘Indi Way’!

Australia’s political playbook has been re-written with Helen Haines keeping Indi independent for the fourth successive term. Some dismissed the election of Cathy McGowan in 2013 as a ‘fluke’. In 2022, Australia voted for change and for a higher standard of representation and has shown that Cathy winning Indi in 2013  was no fluke! Communities across the Nation have also now spoken and they have acted. People are demanding to be heard and the election results reflect that voters will no longer be ignored or taken for granted.

Other communities can do this too?

The Parliament  looks very different after  the May 2022 election. A reminder that democracy is of the people and for the people!  Voices for Indi is encouraged to see that other communities have been  inspired by the achievements in Indi and have been similarly emboldened to create change in the way people engage with democratic processes around Australia. Many groups have contacted V4i to better understand the Indi model and have adapted it to suit their own community contexts.

V4i openly shares many of the resources that were developed for Indi, but each community is encouraged to explore the particular circumstances and issues of their own electorate to help inform and strengthen any political action.

Grass roots community engagement and agreed core values were, and remain, fundamental to what has been achieved in Indi. Elements of the V4i model have indeed been successfully adopted in other communities with community concern regarding the existing standard of political representation being the common starting point.

Voices for Indi would like to emphasise that the use of ‘Voices for’ by other groups does not indicate a formal link with, or endorsement by, V4i. There is no franchise in place and any group using the ‘Voices for’ tag has chosen to do so quite separately to V4i. We are not a political party –  we are seeking improved community engagement and real representation. In Indi’s case, genuine and effective community engagement has informed a new way of doing politics  resulting in four terms of Independent representation. Higher levels of participation in democratic processes provides a benefit in any electorate which may at times be enhanced by the election of an independent but should also improve standards of representation for party candidates.

V4i’s core values, as determined by a large number of supporters in Indi, are fundamental to what is now known as the “Indi Way”. We therefore do not offer endorsements for any other ‘Voices for’ group, only encouragement to mobilise their local community to actively participate in democracy to demand the standard of representation consistent with their agreed collective values.

For more information, check out The Community Independents Project

Voices for Indi is a community movement, initiated in 2012, to build a voice in our democracy for the people of Indi. It was during the 2013 process of Kitchen Table Conversations, culminating in the V4I report, that interest developed in seeking an independent candidate who would be aligned with the values and issues that people in Indi said were important to them.

V4I was the catalyst for Cathy McGowan’s campaign, however the campaign was conducted by a group of over seven hundred people, far bigger and broader than V4I.

What is V4I known for?

Only a few years ago Indi was ignored by both major political parties, it was an electoral backwater. A long-held Liberal seat with seemingly no real choice for voters. That all changed in 2013 when the community engaged with a new way of doing politics and elected an Independent against all odds. Today ‘The Indi Way’ is known across the country as an example of modern democracy at work and there is constant interest and reference to Indi in state and national media. The people of Indi are now heard in a positive and constructive way and many other electorates are seeking to achieve the same result.

V4I is also known for facilitating a range of innovative events and activities designed to encourage participatory democracy.

V4i is not a political party

What is V4I's ongoing relationship with Dr Helen Haines

Voices for Indi is a community group, not a political party. V4I has a long term goal of building community participation in politics and democracy regardless of age, geography or political party allegiance. Consistent with V4I values, we welcome Dr Helen Haines’ style of engagement with people across the electorate and her encouragement of their direct input into current issues and opportunities. We also welcome the transparency of Dr Helen Haines’ voting record in Parliament and her regular addresses to the Parliament on issues and achievements in Indi. Politics is now done differently in Indi and we are collectively proud of what has become known as ‘The Indi Way’.

What is V4I’s relationship with political parties?

Voices for Indi is a community group which continually engages with and invites representation of all political parties to attend its events and to participate in this community movement.  V4i is focused on increasing participation in politics and actively encourages everyone, particularly young people of any or no political persuasion to get involved with the democratic process, to enrol and to vote.

V4i seeks to encourage individual people to find their voice, express it, engage and be heard by all politicians and to experience how their involvement can influence development of policy positions and the Member of Parliament’s voting patterns.

Will V4I be backing Helen Haines in the next election?

Voices for Indi continues to have confidence  in Helen Haines’ style of representation. She has adhered to the people’s expectations of their Member of Parliament, as documented in the 2013 Voices for Indi report. Many people in Indi stated that they wanted  a local political representative who truly represents the electorate, is strongly connected to the community, is accessible, visible, responsive and pro-active and is their voice in the political process. Respect for the people in the electorate and being worthy of their respect, as well as listening, being honest, polite and always working with integrity are seen as critical. The electorate values  someone who has a strong set of values, a moral compass and is prepared to ‘walk the talk’ and Helen continues to meet these standards.

Cathy McGowan announced on 14 January 2019 that after two terms, she had decided not stand at the 2019 election and wanted to hand the baton on to a new Orange Independent Candidate.   Close to 200 community members participated in a forum on 12 January 2019 in Benalla and used a consensus decision making process to invite the new candidate from a field of three applicants. Unlike a party pre-selection process, The V4i  team of volunteers  did not participate in the decision making and simply facilitated the forum for the community.  Helen went on to be successful at the 2019 election, and the community asked her to continue the respectful and consultative style of representation that Cathy McGowan had made synonymous with Indi.

Will V4I be involved in the next election?

Voices for Indi exists to build an active 21st century democracy in Indi and will be involved in every election for the long term.

What is V4I's role in the next election campaign?

Voices for Indi is a community democracy movement, not a campaign team. Some individual members of the V4I team were also active leaders in the 2013, 2016 and 2019 elections while others were less involved. Similarly, some have previous memberships of political parties and others do not. It is anticipated that some individual members of V4I will choose to remain actively involved in future election campaigns, whilst others may stay more focused on the broader work of V4I.