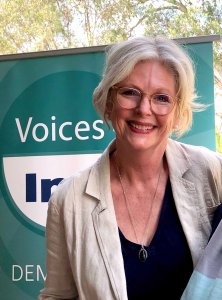 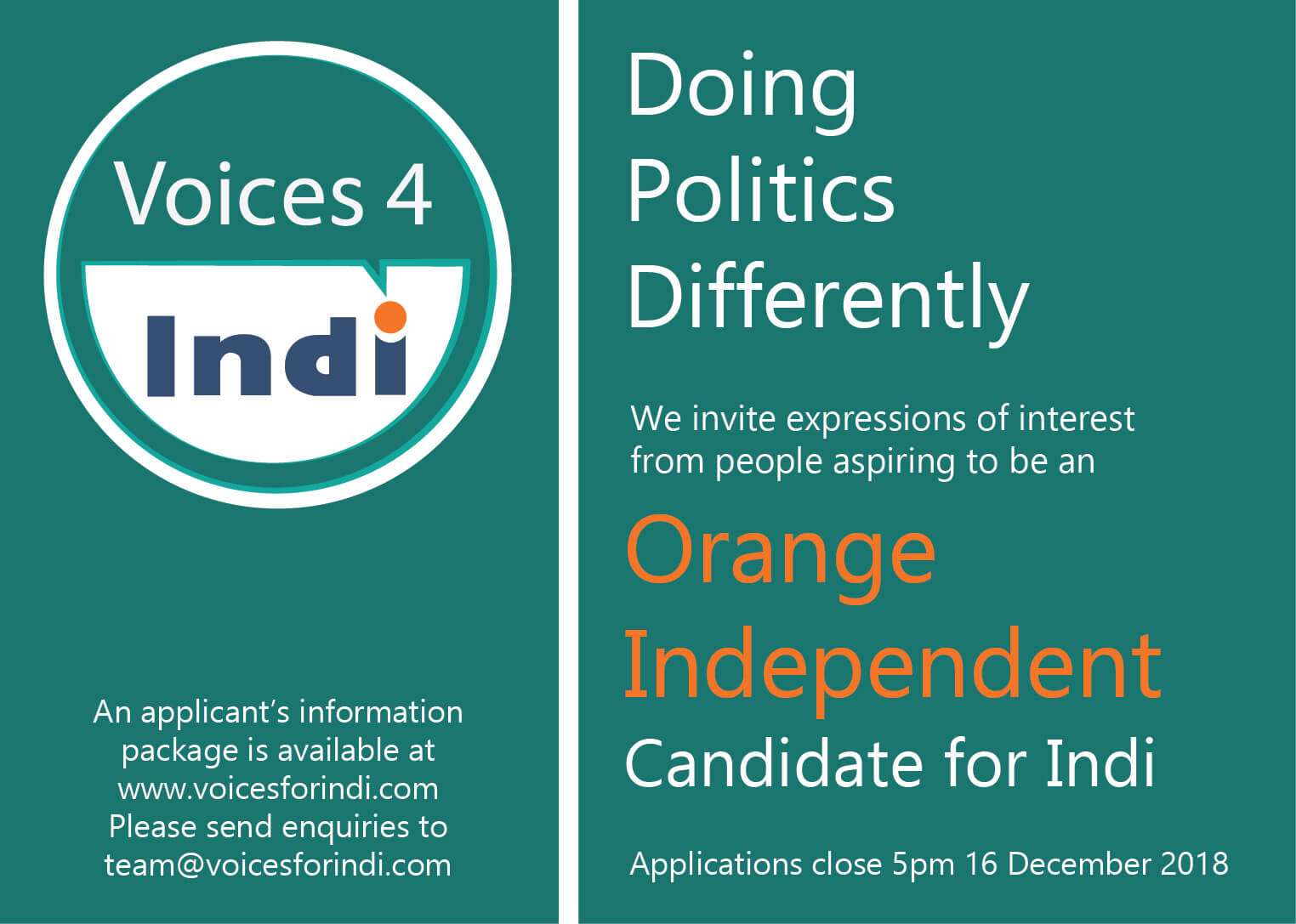 Voices for Indi is proudly hosting Gabrielle Chan, author of Rusted Off: Why Country Australia is Fed Up. Events are planned in Mansfield, Albury, Violet Town, Wangaratta and Shepparton.

Have you thought about running for Council or Parliament?

Or is there someone you know who’s interested in doing so, and you’re wondering how you can support them? We’re running… A workshop that is! Voices for Indi invites you and your support team to participate in a practical workshop designed to provide prospective candidates with enhanced skills and knowledge to get elected. The workshop will focus on how our political system works, strategies for campaigning, managing expectations and connecting with your community.

Join us in Wodonga for a weekend fiesta of politics. Hear from politicians, academics, staffers, community leaders and experienced campaigners – they’ll share their advice and ideas for emerging political leaders.

Of course, you’re welcome to just attend the Saturday evening event. Gabrielle and Alana will be talking politics and rural Australia, and perhaps we’ll get a sneak peek of Gabrielle’s book, Rusted Off: Why Country Australia is Fed Up to be released in September 2018 by Penguin Random House.

We look forward to seeing you there!

“There is much to be disappointed about in politics if we were to be spectators” – Denis Ginnivan, President V4I

Voices for Indi (V4I) is a community engagement process which is revitalizing and building ‘democratic capital’ in regional Australia. V4I was set up to provide a simple and effective process by which all people across the Indi electorate, regardless of political affiliation, can have a voice – where their interests, concerns and ideas are heard and respected. The participatory process allows constructive input, focusing on ideas, policies, and strengthening representation. It enables people to articulate their shared vision for Indi, to learn and to connect with each other and importantly, build alliances for action.

There is much to be disappointed about in politics if we were to be spectators. But there is much to be optimistic about if we are to be participants. Voices for Indi is a way of thinking about and participating in politics. It comes with values – diversity of voices, active invitation to participation, mature representation, our community is heard, honesty and respect, and transparency. We encourage everyone’s respectful participation in democracy and in shaping our future. And those on the committee have no party-political allegiance.

This is my first President’s report. I wish to briefly ‘snapshot’ some of the many activities and achievements which reflect our V4i mission during the year.

Our 2016 AGM guest speaker was ANU Professor Carolyn Hendricks. Professor Hendricks subsequently wrote a paper about democracy in Indi in the Australian Journal of Political Science; ‘When representative Democracy turns participatory: Indi and Beyond’. Her academic paper is valuable as she gives a detailed objective analysis and discussion about our work.

Late last year V4I made a submission to the Joint Standing Committee on Electoral Matters following the 2016 Federal election. We made arguments for full disclosure of campaign funding, and for addressing breaches of voter privacy, particularly relating to our young people.

In early 2017 V4I undertook a redevelopment of the Kitchen Table Conversation kit. In February, V4I presented to the Australian Rural Leadership Program workshop held at Oxley.

In May V4I committee members attended as guests of the Communities in Control conference; a conference for community and human services within the not-for-profit sector. We were thrilled that two participants of the 2017 Indi Youth Politics Camp were also able to contribute to the conference.

In June, V4I gave input to the Doing Democracy Differently workshop hosted by the International Association for Public Participation, (IAP2) presented by Dr Brett Henning; co-founder of the Sortition Foundation. Dr Henning’s new book ‘The End of Politicians: Time for a Real Democracy’ has been very instructive for discussion around where a politician’s role interfaces with what a citizen’s responsibility is in a democracy. This IAP2 event also focused on developing ways for engaging citizens in decision-making and public participation.

In July V4I had representation and input to the Victorian Regional Partnerships Assembly, held in Wodonga. V4I also made an important presentation to the National Rural Social Workers Conference in Albury.

In mid 2017 V4I was approached to contribute memorabilia to the Museum of Australian Democracy, given the Museum’s role in recent years promoting and positively influencing engagement in democracy. Whilst sharing our collection with the Museum was an honor, it is important to clarify that we were not to be put in the dinosaur and fossil section!! Because we have much more to do!

In August, some members attended the Accountability and the Law Conference at Parliament House, Canberra. Here the Case for a Federal Independent Commission Against Corruption was strongly made, and this imperative reflects views of many in Indi expressed at V4I sponsored meetings and consultations.

In September V4I hosted, and made presentation at regional workshop for the International Association of Programs for agricultural Leaders held at Winton Wetlands. It was fabulous to share our stories and experiences with agricultural leaders, in this case, mainly from the United States.

Earlier in November V4I made an in-person submission to the Federal Inquiry into Regional Development and Decentralisation. We are very proud of the young Indi people who participated so competently in the hearing. This enquiry was strongly advocated and championed by Cathy McGowan, Federal Member for Indi. In our submission, we focused on key themes and on the importance of respectful consultation with rural communities. Our submission in on the Inquiry’s website. We hope to have further input on this Inquiry when the draft paper is circulated for further discussion.

Along the way, we made numerous presentations to community groups in various parts of Australia, seeking to improve their democratic representation. These occurred in Sydney, Adelaide, Canberra, Melbourne. We are also engaged with the Australian Rural Leadership Program, The Alpine Valleys Community Leadership Program, and Indi Youth Politics forums. V4I also presented to Monash medical students and to La Trobe Alumni.

V4I has maintained a website and social media presence, and encouraged Indi residents to avail themselves of the opportunity to spend a week in Parliament House, Canberra, in the office of the Federal Member for Indi. In 2018 V4I will continue with encouraging the active participation of our Indi citizens in the consultation and representative process.

I am so grateful for the opportunity to work with such an energetic creative and selfless voluntary group called the Voices for Indi committee. Our job is to hold the V4I vision and mission, and to encourage and support people, young and old to participate in this gift we have as a nation – Democracy. Behind every one of our events and processes there is an extraordinary amount of discussion, planning and detail which is required of our committee. I particularly want to acknowledge and thank Anne Shaw, our V4I Secretary for her diligence, energy and commitment – not to mention her patience with me!

But there is more to do. We want to continue our work: bringing key speakers to the region; participate in opportunities for rural input to political processes; develop a training event for aspiring candidates who seek election in all levels of government representation. Real competition at elections is essentially for a healthy democracy. Our V4I processes are working!

V4I is an entity much larger than just this small committee. The V4I movement is reflected in all those people who see politics as important, who want to be involved, who want to show their children that things can be better, and who want to have a voice in Indi.

It’s been an honor to serve in the President role over the past 12 months. Thank you for the opportunity!